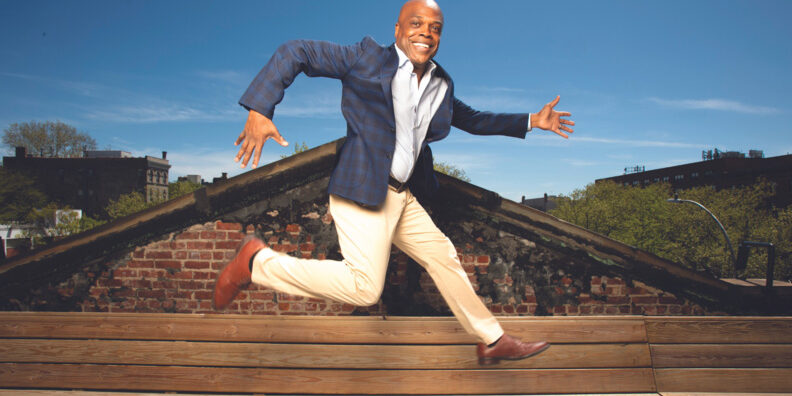 When Ty Jones needed to support himself in college, he started a business painting building interiors and exteriors.

Years later, after he had become an actor and discovered his true calling performing Shakespeare at the Classical Theatre of Harlem and other such companies in the region, he found himself tapping into his entrepreneurial side once again.

The financial crisis of 2008 had left the Classical Theatre of Harlem $400,000 in debt. Board members departed. Actors’ checks bounced. Jones confronted the future—his and the theater’s.

“I knew from my previous years working on stages that there was something special here,” he said. “And I didn’t want it to go away. I wanted the 10-year-old me to have this theater.”

He became the theater’s board chair, managing director and main fundraiser. Very slowly, he raised money from foundations and grants, as well as from a micro-donation campaign of $10 per month, and slowly he retired the debt.

“Then cool things started to happen,” he recalled.

A young audience from diverse backgrounds flocked to the theater company, which began staging Shakespeare in an uptown park each summer. It sent the message that New Yorkers didn’t have to head downtown to see great art.

LIVES On the border of Washington Heights and Harlem

EDUCATION Bachelor’s in communications and master’s in professional theatre training, the University of Delaware

GIVING A SERMON Jones grew up all over the world with his mother, who served in the Air Force. Each Black History Month, his mom would ask him to perform for the base, and one of the pieces in his repertoire was a poem from James Weldon Johnson’s book God’s Trombones. When he needed to audition for the master’s program at the University of Delaware with two pieces, he pulled Johnson out of his back pocket. “It changed my life,” he said of getting into the program.

MUSICAL KIDS Jones’ three children are all in the arts. One plays the cello, another, the piano, and the third, the violin. “I don’t think it’s an accident that my three kids are [performers],” he said.

In the summer of 2015, a New York Times reviewer wrote that the Classical Theatre’s performance of The Tempest in Marcus Garvey Park was “energizing” and beautiful (yet uneven), and turned the park into a paradise for a night. That summer the Public Theatre also did The Tempest, and Jones felt his show had entered the conversation with an institution several times its size. His team expanded, and he is now the producing artistic director, as well as an actor in some productions.

When performing arts venues that hosted the company closed earlier in the pandemic, Jones had to once again tap his entrepreneurial instincts. The Paycheck Protection Program was sustaining, though the theater was not one of the 1,474 eligible organizations in New York to receive money from the $2 billion in Shuttered Venue Operator Grants that went to firms and nonprofits in the performing arts.

The theater was able to expand outdoor programming and connect with audiences online and through social media.

Now Jones is working on a strategy to get through the next 18 months. This summer’s programming includes Twelfth Night, which will take place in Marcus Garvey Park through most of July. Inflation, however, has pushed up the price of the set by many times what Jones had hoped to pay. He is also seeking to reprise a piece called Langston in Harlem, about poet Langston Hughes.

The Classical Theatre of Harlem was one of several partners to produce a podcast about the Harlem Renaissance, and it is also working on animated educational programming intended to introduce students to classical theater in a format they already love.

At the end of the day, Jones is an actor, one who has won the Obie Award for the Classic Theatre’s production of The Blacks and one for whom the arts have tremendous meaning in 2022, just as they did when he found the theater two decades ago.

“My participation in the arts,” he said, “is about the possibility of creating a worldwide understanding of humanity.”