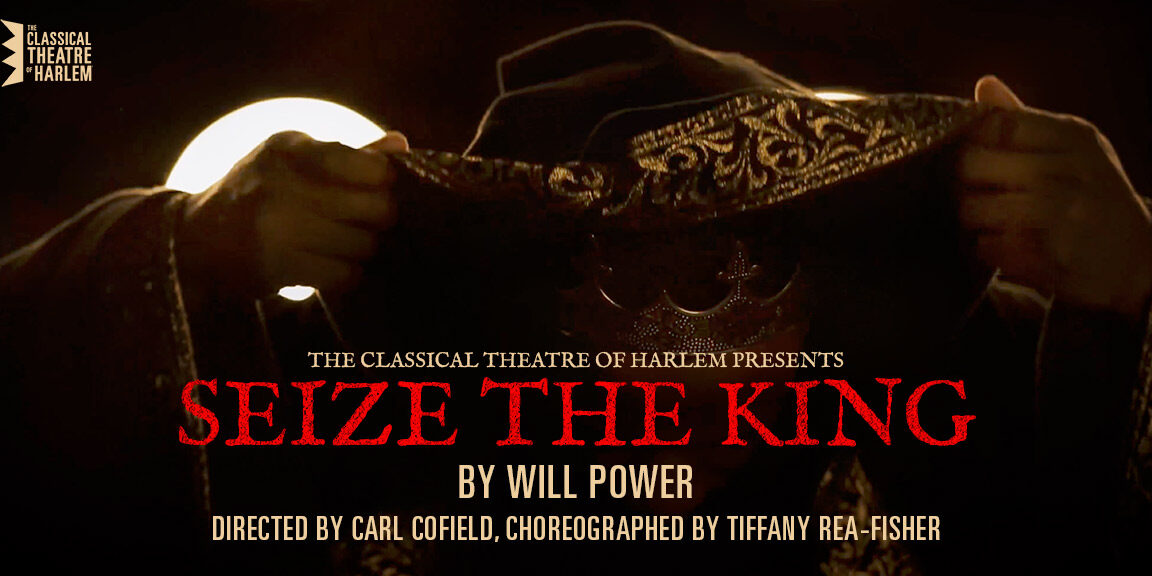 The Classical Theatre of Harlem presents the New York Premiere of

New York, NY, March 25, 2021 – The award-winning Classical Theatre of Harlem, (Producing Artistic Director, Ty Jones) is forging ahead with ambitious plans to bring back its signature production for audiences this summer. CTH’s “Uptown Shakespeare in the Park” series will reopen this July with the New York premiere of “Seize the King,” a reimagining of Shakespeare’s “Richard III” by the award-winning Will Power, directed by Carl Cofield and choreographed by Tiffany Rea-Fisher. Some shows will be preceded by CTH’s series, “Courageous Conversations,” featuring intimate live discussions on the intersection between art and social justice.

Power was introduced to Shakespeare in his youth and didn’t initially connect to the 400-year old plays. But as he gained more life experience, he became interested in finding the relationship between classic and contemporary texts.

Power said that current world circumstances inspired him to revisit “Richard III” to see how it relates to a 21stcentury audience.

“I have always been a playwright that goes to big questions,” Power said. “ I think of the times we’re in right now, the polarization, the dysfunction, the corruption that exists in society right now, in our country. I think in order to explore what’s going on today, particularly in extreme times, you have to go back to the past and imagine what those old stories are for today.”

He added, “How can I write original works that speak to the past but shine a light on today. I would say that ‘Richard III’ in my play is not necessarily any one person of today. I am interested in these human virtues and these human faults that continue to pop up in our existence as humans no matter what the gender is, what the ethnicity is.”

Recently appointed head of Graduate Acting at NYU and Associate Artistic Director, Carl Cofield, says, “Will Power is an extraordinary American playwright/artist, whose profound curiosity, incredible ear for language and bold reimagining of history, makes for theater that I am passionate about. Whether it’s his take on the Greeks, Shakespeare or American folklore, he always blends rich storytelling and musical text that forces the audience to lean in and look at the subject through a different lens. I am delighted to collaborate with Will on the New York City premiere of Seize the King.”

COVID safety measures including mandatory masking, digital playbills, distanced seating, and sanitizing stations will be implemented for the safety and comfort of everyone involved. CTH Producing Artistic Director Ty Jones says “after a challenging year for the theatre community, audiences have been eager to return to live shows. We are confident that the many measures we are putting in place provide an atmosphere and environment to bring back live outdoor theatre here in Harlem.”

ABOUT THE ARTISTS
Director: Carl Cofield
Carl Cofield directed several plays for CTH before joining as Associate AD in 2018. Notable directing credits for CTH include the critically acclaimed productions of The Bacchae, Antigone, Macbeth, The Tempest and Dutchman. Also, he directed the award-winning world premiere of One Night In Miami for Rogue Machine Theater and the Denver Center Theatre, A Raisin In the Sun for Two River Theater Company, The Mountaintop for Cleveland Play House, Disgraced for The Denver Center and Henry IV Part 2 for the Oregon Shakespeare Festival, A Midsummer Night’s Dream for NYU and Twelfth Night for Yale Rep. He holds an MFA from Columbia University. Mr. Cofield is the Chair of Graduate Acting at NYU.

Power has received numerous awards for his work as a writer and performer in the field, including The Doris Duke Artist Award, an Andrew W. Mellon Playwright in Residence Grant, a Lucille Lortel Award, a United States Artist Prudential Fellowship, an NEA/TCG Residency Grant, TCG Peter Zeisler Memorial Award, an NYFA Award, a Joyce Foundation Award, and 2020 Elliot Norton Award (Outstanding New Script, Detroit Red). Currently, Will Power is a Professor of Theater at Occidental College in Los Angeles.

ABOUT THE CLASSICAL THEATRE OF HARLEM
The Classical Theatre of Harlem (CTH) is an American theatre company that tells stories through the lens of the African diaspora. CTH combines original adaptations, music, and dance to present great classics of world literature as well as contemporary works that will stand the test of time. Since its founding in 1999, CTH has presented works ranging from traditional classical playwrights (Anton Chekhov, Euripides and William Shakespeare), to established, 20th-century playwrights (August Wilson, Langston Hughes and Jean Genet) to new plays by emerging playwrights. CTH also proudly provides theater-based training and live theater experiences to Harlem youth and their families through its arts education program, Project Classics. The organization incorporates other theatre-related programming including Future Classics, Playwrights’ Playground, and Revisited Classics to engage new audiences, invest in artistic development and give exposure to emerging creators.

The company serves over 18,000 live audience members (pre-pandemic). Its new online offerings this past season have drawn over 500,000 viewers.

The Classical Theatre of Harlem’s Uptown Shakespeare in the Park production of Seize the King, performance schedule:
*Indicates Pre-Curtain performance of Jazz Mobile